On 6th August 2022, Steve Kettley and Savourna Stevenson joined forces to perform and workshop in the Spanish town of Noia, Galicia.

On 20th August 2021, Savourna Stevenson and Steve Kettley took to the stage at the Acoustic Music Centre, playing some old favourites as well as some new material.

During Lockdown, Savourna Stevenson featured as an artist on the award-winning Scotsman Sessions with her composition Bookworm. To see the whole article and Savourna’s performance follow the link below:

In August 2019, harp and saxophone duo Savourna Stevenson and Steve Kettley returned to the Edinburgh Fringe for two performances at the Acoustic Music Centre on Sunday 11th August and Sunday 18th August. 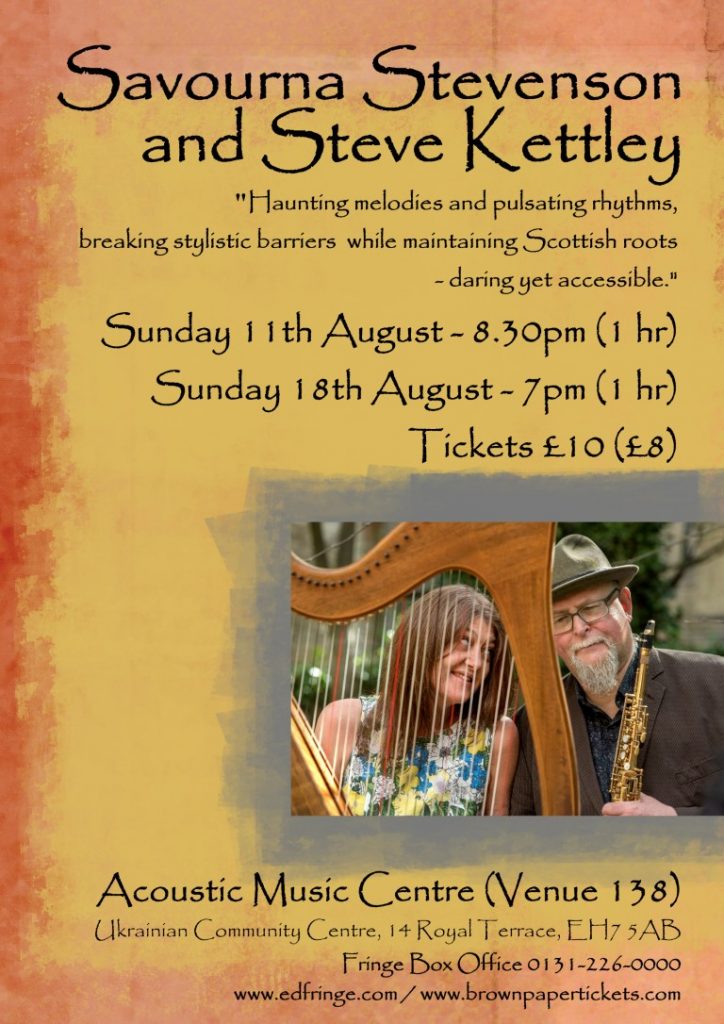 Performances around Scotland with Steve Kettley in 2019

Savourna performed with saxophonist Steve Kettley on the 2nd of May at Edinburgh’s Story Telling Centre, (The Netherbow) as part of Tradfest. The duo also toured venues around Scotland including: An Tobar (Tobermory) 9th May, The Library – Iona 10th May, The Blue Lamp Aberdeen on May 24th and Solas Festival near Perth on June 22nd. Performances in the Edinburgh Festival Fringe 2018 with Steve Kettley

Stevenson performed with saxophonist Steve Kettley at the Edinburgh Festival Fringe in 2018. The duo demonstrated their talents at the Acoustic Music Centre on Saturday the 11th of August and Sunday the 19th of August, where they were well-received by critics and received a four star review in the Scotsman newspaper.

Savourna performed with saxophonist Steve Kettley in an Edinburgh House Concert on Friday 16th of February, 2018. Steve is a musician, composer and occasional actor, who plays tenor and soprano saxophones, flute, jaw harp and percussion. He leads several bands playing his own music, and is well known as a founder member of the international touring and recording group Salsa Celtica. Recently, Orange Claw Hammer, a quartet dedicated to interpreting the music of avant-rock legend Captain Beefheart, has been a major concern. For the last few years Steve has been enjoying a productive collaboration with former national poet (Makar) of Scotland, Liz Lochhead. Savourna performed at the Harp on Wight Festival on Sunday the 22nd of October 2017 from 7.30pm alongside the superb Steve Kettley. Steve is a musician, composer and occasional actor, who plays tenor and soprano saxophones, flute, jaw harp and percussion. He leads several bands playing his own music, and is well known as a founder member of the international touring and recording group Salsa Celtica. Recently, Orange Claw Hammer, a quartet dedicated to interpreting the music of avant-rock legend Captain Beefheart, has been a major concern. For the last few years Steve has been enjoying a productive collaboration with former national poet (Makar) of Scotland, Liz Lochhead.

Visit the Harp on Wight Festival website for more information!

See below a link to Savourna and Steve in concert at the festival: 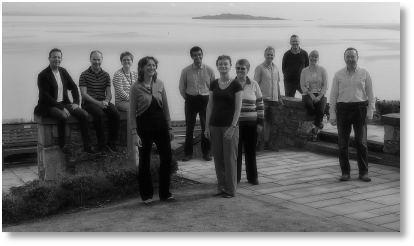 The evening began with Border Piper, Matt Seattle who piped the audience into the venue from the rooftop of Neidpath Castle, followed by site specific performances from the Scottish Vocal Ensemble and Savourna Stevenson. A varied programme explored the unique landscape, literature and culture of the Borders, performed in a dramatic setting of an ancient tower, which dominates a bend in the River Tweed. The programme included ‘The Dream’ by Savourna Stevenson inspired by the writing of John Buchan and works that delve into the myth and legend passed down in famous Border Ballads. a Stevenson and Miles Norris

Savourna collaborated with guitarist and bassist Miles Norris in concerts across Scotland, Ireland and Europe. Together, they have performed in venues including Merchiston Castle School as part of the Edinburgh International Harp Festival and at Broughton Village Hall for a local charity event. To read what the press had to say about the duo, visit the performing reviews section of this website.

On the 27th and 28th of May 2017, Savourna joined Children’s Classic Concert’s Essential Orchestra to perform a programme of Scottish music devised and presented by Owen Gunnell and Oliver Cox. Performances took place at Saint John’s Kirk, Perth and the Macrobert Arts Centre, Stirling and included a new arrangement of Stevenson’s Misterstourworm and the Kelpie’s Gift for smaller orchestra by Oliver Cox. The Campbells Are Coming  – Leroy Anderson

The Can Can – Offenbach

Savourna and Miles also performed with Traquair Community Choir at Peebles Eastgate Theater on the 27th of August 2016. The acclaimed duo headlined this special concert of music from around the world. From African inspired music through South American flavoured tunes, via an Irish waltz to Medieval England and beyond. They were supported by Traquair Community Choir under the musical direction of Julie Leavett. The Borders newest community choir opened the evening with a programme of traditional and contemporary folk songs featuring two original songs by Savourna which she accompanied on pedal harp.

Savourna had a wonderful time at the Twenty-Third South German Harp Festival in the beautiful German Alps between the 24th and 26th of March 2016. She joined other artists, including Uschi Laar and her trio as well as Park Stickney, in a number of seminars and concerts in Miesbach and Labenbachof near Ruhpolding.

As part of saxophonist Steve Kettley’s monthly Click Clack Club, Savourna and guitarist and bassist Miles Norris joined Trevor Conway and Anything in Trousers for an evening of blues, jazz, funk, improvisation and more at Henry’s Cellar Bar, Edinburgh on the 24th of November 2015.

Fiddlesticks and String Along Workshops Throughout 2015, Savourna joined percussionists Owen and Olly and the Fejes Quartet in Children’s Classic Concerts‘ concert series, Fiddlesticks. There was much madcap musical mayhem to be had, featuring violins and vibraphones, clarsachs and cowbells and basses of both the drum and string variety!

The performances offered a mix of jolly jazz, calming classical and Scottish traditional music, plus lots of fun and audience participation. This series of concerts fused traditional and contemporary styles for music fans of all ages, and performances took place all across Scotland in the Macrobert Arts Centre, Marryat Hall and Elgin Town Hall.

And the fun continued with String Along workshops where young participants learned all about the clarsach with Savourna and CCC presenter Olly. Here, the children were able to find out all about the stringed instruments and even played the clarsach themselves!

SAVOURNA STEVENSON with THE EDINBURGH QUARTET

Savourna presented a varied and exciting retrospective spanning her three decades of virtuosic and innovative work with the harp, from traditional favourites recorded on her re-released 1985 Tickled Pink album through blue grass, jazz and world music styles on the small harp and progressing on to her recent work with the pedal harp. Special guests, including the Edinburgh Quartet, joined Savourna to perform her Harp Quintet acclaimed for its use in American TV series ‘Sex and the City’ and ‘Ugly Betty’.

Savourna performed throughout 2011 and 2012 with NYCoS, the National Youth Choirs of Scotland…

Local NYCoS choirs joined Savourna as her concert guests at venues from Dumfries to Stornoway and performed her songs specially commissioned by NYCoS. Savourna performed on both the small harp and pedal harp with a programme including her own compositions alongside virtuosic works by Debussy, Hasslemans and Ravel.

If you would like to hear Savourna’s songs specially written for NYCoS, they have also been included on the Misterstourworm CD ( see shop), performed by the Orchestra of Scottish Opera with the Edinburgh NYCoS choir and the RSNO Junior Chorus.

In 2012 Savourna collaborated with the wonderful Martinů Quartet from Prague on a programme including her own Harp Quintet.