Savourna Stevenson and Steve Kettley are delighted to announce that their long awaited album ‘Wine of Life’ is out now, featuring tracks such as ‘Tango Mafioso’ and ‘Gamelan’. Available to stream and download via the link below: 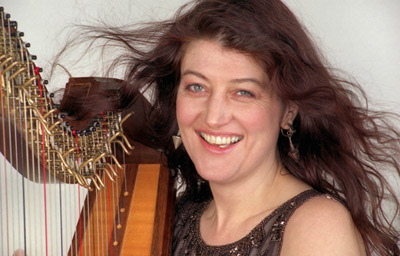 “a composer who is a national treasure” – The Herald

Although her music strongly reflects her Scottish roots, it also reveals her uniquely eclectic and innovative urge to break through stylistic barriers between classical, folk, world music and jazz. The diversity of commission, organisations from the BBC to Iona Abbey, and her equally diverse audiences, from concert hall patrons to viewers of HBO, are a measure of the breadth and scope of her output. Savourna’s ever expanding catalogue includes a large body of work for harp, notably her Harp Quintet (CD Touch Me Like The Sun) acclaimed for its use on American TV shows ‘Sex and the City’ and ‘Ugly Betty’ and her Concerto for Pedal Harp premiered to enthusiastic audiences throughout Scotland in June 2012 by international harp soloist Catrin Finch with the Scottish Ensemble. The Herald critic found it typical of what he called “the joy of Savourna Stevenson’s music … from the heart and to the heart, absolutely open and totally honest in its integrity and expressive qualities … voluptuously romantic … unashamedly gorgeous … and a darker striking flavour of Bernard Herman in the finale”.

Savourna Stevenson’s three large scale children’s orchestral works with narrative, Misterstourworm and the Kelpie’s Gift, Hansel and Gretel and The Snow Queen, plus three orchestrated songs for the National Youth Choirs of Scotland signify her major contribution to music for children.

“instrumental storytelling with a special intuitive magic of its own” (The Scotsman) … “a resounding success with orchestral imagery that was impressionistic, ravishing and exquisite” – The Herald

“Savourna Stevenson’s ‘Waiting for the Silver-Sailed Moon’ for the upper voices was again confirmed as the loveliest tune to have been created by the choral organisation’s commissioning work”. – The Herald

Recent commissions include works for choir and for pedal harp, whilst Savourna is currently writing her largest piece to date: a work for piano and orchestra entitled ‘The Secret Life of a Piano’.

As a performer Savourna has been in the vanguard of the rennaissance of the celtic harp, collaborating with traditional artists including Aly Bain, Danny Thompson, Davy Spillane, June Tabor and Eddi Reader. Musical experimentation across a variety of genres led to more collaborations with artists such as African Kora player Toumani Diabate, the Bhundu Boys (Zimbabwe), Iranian percussionists The Chemiranis and many more at Peter Gabriel’s Real World Studios and WOMAD festivals.