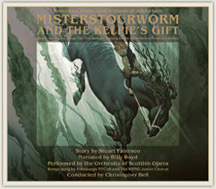 As a performer, Scottish harpist Savourna Stevenson crosses many musical boundaries. As a composer, that eclecticism informs a delicious little “musical adventure” called Misterstourworm and the Kelpie’s Gift, which she claims is the first such narrated piece since Prokefiev’s Peter and the Wolf. That’s debatable, but the bottom line is this: it is a delightful work, narrated here by actor Billy Boyd, sung by the National Youth Choir of Scotland Edinburgh branch and the RSNO Junior Chorus, with the Scottish Opera Orchestra under Christopher Bell’s direction. Add to that some other songs by Stevenson and a colourfully illustrated booklet, and the package is just the ticket for young children who like a good tale well told.

BILLING itself as the first narrated children’s symphony since Prokofiev’s Peter And The Wolf in 1936, this project is the result of a 2001 Creative Scotland award to Scottish harpist Savourna Stevenson. Also involved are playwright Stuart Paterson, the National Youth Choir of Scotland, the RSNO Junior Chorus, the Orchestra of Scottish Opera and Lord Of The Rings star Billy Boyd.
It’s a myth set in the Western Isles featuring a brave young man called Coran, who sets out to rid his land of vicious sea monster Misterstourworm. Boyd narrates, the choirs sing and a seven-movement orchestral suite also fits into the bargain.
The 40-minute CD won’t overtax the attention span of the average eight-year-old, but for a real thrill, there will be a live performance at the Skateraw Foundation, East Lothian, at 2.30pm tomorrow.

Back in 2003, Billy Boyd was a well kent face in Scottish theatre but the world had yet to know his name. At that point, composer Savourna Stevenson and writer Stuart Paterson secured Boyd’s services to narrate their new orchestral project, Misterstourworm and the Kelpie’s Gift. A year later, Boyd’s performance in Lord of the Rings raised his profile considerably. But his commitment to this magical, yet relatively small-scale, Scottish project was not diminished. Not only did Boyd agree to record the Misterstourworm CD, but he’ll also appear at the launch concert at Skateraw, Dunbar on 9 June.
‘My only reservation was whether I could commit to the date,’ says Boyd. ‘Not for the recording, but the live show. To work your whole year around one day in June is difficult. But because I’ve been so involved in this from the start, I just thought I’m gonna do it, we’ll work it out.’ Beautifully packaged, with dramatic illustrations by Martin McKenna, the CD is a wonderful introduction to classical music for children of all ages. Based on the mythical tale of a brave young man who fights the vicious Stourworm, the story is bold and exciting.
‘You’ve got to tip your hat to Stuart,’ says Boyd. ‘Whatever medium you work in, whether it’s radio, film, whatever, if you’ve got the right words to say it becomes a lot easier. Good writing should always be your starting point and then you add to it what you can.’ Stevenson’s score is a sweeping, dramatic affair which plunges from gentle melodies into moments of fast-paced intensity. With Boyd’s narration matching her music all the way.
‘I just loved it,’ says Boyd of his recording experience. ‘I had my headphones on and was loving the music, and just got carried away with the story, it’s so exciting.’

For the past 70 years the most recent music and narrative composed specifically for children was Prokofiev’s Peter and the Wolf in 1936 written for his own children. Finally there is something new and modern for children to listen to, which might just open the world of classical music for them. Misterstourworm and the Kelpie’s Gift is a very exciting recording of a work composed by Savourna Stevenson in 2003 and performed once that year. It brings together the Orchestra of Scottish Opera with narrative by Stuart Paterson and offers a blend of sweetness and darkness that turn the best fairy tales into favourites. Flute and harp create a magical harmony evoking faeries and stardust, while the frightening power of the monster come through strongly through the deep brass instruments.
Actor Billy Boyd (Pippin in Lord of the Rings) narrates the tale beautifully, heightening the tension of the fight between good and evil. His words come across clearly, at just the right level to enable listeners to enjoy both the story and the music. The CD first offers the narrative version of the tale, then the music without the words. The little book, into which the CD is cleverly fitted, provides the story, beautifully illustrated, so children can read it for themselves while the music is playing.
There are a bonus three songs on the CD, including a lullaby, and a wonderful, powerful song “Bullies” which reworks the nursery rhyme “Mary, Mary” to tremendous effect.
When my 13 year old daughter heard Misterstourworm and the Kelpie’s Gift for the first time, she was transfixed by the connection between narrative and music.
This is a treat for everyone to enjoy, and the most wonderful part is that the music grows on you, the more you hear it. The story also comes through more clearly when you get to know the music, so I recommend you listen to it several times over a few weeks, to turn it into a family favourite. It provides a glorious experience for children and grown ups alike.

Savourna Stevenson should be rightly proud of this vivid and atmospheric score with its network of themes and motifs that develop with the story. It works as an independent piece without the narration and indeed is heard as such at the end of the CD after three Stevenson songs performed by two Scottish youth choirs. Billy Boyd ( Pippin in Lord of the Rings ) is the excellent derring-do narrator … conductor Christopher Bell does it proud, as does the engineer …